Anybody out there like to watch movies? My kids’ current fav is The Princess Bride. They quote the movie 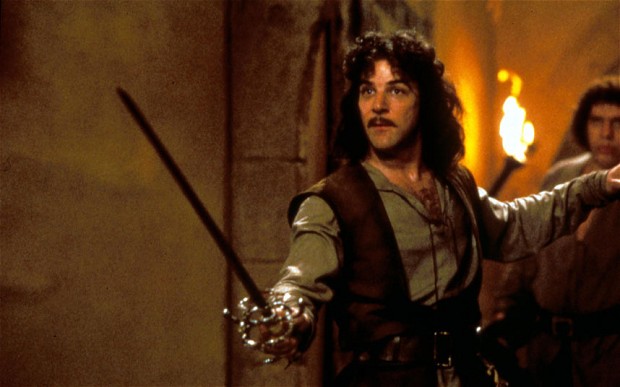 as it is playing along, laughing hysterically at scenes they have watched a thousand times.

One scene in particular resonates so deeply within me as to why I’m so passionate about the need to encourage and build community within our churches. This scene perfectly portrays the necessity of it- why we can’t keep living the Christian life ALONE.

The count is in the castle finding himself quite comfortable in his royal position and all that his title affords him. For application purposes, we’ll call this position “comfortable Christianity.” We know our position as “saved” and we trust in that position to deliver us to heaven after death.

Well, one day the count’s past comes back to haunt him. A man shows up at the royal palace announcing, “My name is Inego Montoya. You killed my father. Prepare to die!” It’s a day of reckoning for the Count- what he thought was dead and gone is actually alive and well- and he is forced to deal with it unexpectedly. In our application we’ll refer to our past as physical or emotional wounds inflicted upon us, lies spoken over us, rejection we’ve faced, betrayals we’ve suffered, or maybe even our own sin and stupidity, wreaking consequences upon ourselves. We thought it was dead and gone- after all- we’re in a royal position now- but it’s actually alive and well and just waiting for the perfect time to kill the life of the Son of God in us.

Initially the count is quite confident that he can quell this resurrected foe and immediately strikes Inego with what he believes to be a mortal blow. However, Inego refuses to give up so easily. He continues to chase the count, jabbing at him from every direction all the while incessantly repeating, “I am Inego Montoya. You killed my father. Prepare to die!”.

The count fends off Inego with skill but after awhile the continually running phrase being spoken over and over again by Inego frazzles him, distracts him from how effectively he wields his sword and begins to weary him. The count begins to shout, “Stop saying that!” which fuels Inego’s fire of revenge, causing him to shout louder in an increasingly mocking tone.

Eventually the Count drops his sword, with Inego backing him into a corner with no escape.

Now I’m sure you can connect the dots, but from an application perspective this is precisely what our Enemy does to us- he brings our past against us at just the right time- relentlessly, methodically, frazzling and distracting us, eventually paralyzing us from being able to enjoy the royal position we’ve been given as daughters of the King of Kings!

Inego couldn’t take away the count’s position- he was a Count regardless- but he could prevent him forom enjoying the benefits of it and putting it to use in the kingdom.

But what if the count had not been alone? What if he had 5, 10 0r 20 other members of his kingdom alongside of him to fend off Inego and silence him? Wouldn’t the Count have been victorious, rather than paralyzed and defeated?

This is what community is all about- learning to live in our royal position. Silencing the lies of our enemy and replacing those lies with truth. Standing together wielding our swords.

If we’re honest with ourselves, most of us are tired of “comfortable Christianity” or worse yet, we’re bored. It’s a position we hold on Sunday mornings and we cling to at a funeral but it doesn’t fix our broken marriages, rescue a loved one from addiction, stabilize us when we’re emotionally imbalanced, give us hope when our financial situation feels like a sinking ship, snatch us from the fires of hell when temptation heats up, give us courage to openly share our faith with a struggling neighbor or co-worker, or challenge us to stand up for ourselves when we’re begin taken advantage of- AGAIN. “Comfortable Christianity” doesn’t offer us victory in these areas. We’re just backed into a corner biding our time.

We have insisted on living the Christian life ALONE so we’re cowering in a corner in fear, waiting for heaven to be free. We say, “but I go to a small group. I have Christian fellowship.” I pray that is so for all of us- but here’s a question to ask yourself about your “authentic” community- how many of your prayer requests center around your struggles, your honest pleas for God to impact the world through your small group, and a desire for opportunities for evangelism? Or do the major prayer requests center around your Aunt Edna’s upcoming gall bladder surgery?

It’s time to hold our swords high in the midst of struggles and brokenness, believing that the kingdom and victory is OURS, not our Enemy’s. It’s time to believe that we’re better together.

Are you ready to step out of the corner of “comfortable Christianity” and experience life in your royal position?